You are here: Home / What We Do / Building Foundations to Keep Animals Safe / Humane Communities / McKinley County Initiative

Beginning in 2018, thanks to a transformative bequest from a McKinley County animal advocate, Valerie King, APNM began funding the Gallup McKinley County Humane Society to enhance the life-saving services its shelter provides for animals in McKinley County through its “Rez Pets Ride” transport program. It’s clear this gift will have an enduring and positive impact on animals in Gallup and surrounding communities.

Funding this important transfer effort — in which the shelter relocates thousands of adoptable dogs and cats each year to high-adoption shelters in Colorado and other states — enables the Gallup McKinley County Humane Society to make a dramatic increase in spending on spay/neuter. The shelter has succeeded in sterilizing more animals in the first six months of this year than in the whole of last year. The shelter has also been able to hire another part-time, high-volume, spay/neuter veterinarian and is making plans to bring mobile spay/neuter services to the Pine Hill-Ramah Navajo area and other underserved locations later this year.

Thanks to generous funding from an anonymous donor, beginning in December 2018 Animal Protection New Mexico has been partnering with the McKinley County Humane Society to bring more relief to animals at risk in the region. The project is employing a combination of increased on-the-ground outreach to residents, supportive services for animals, and an awareness campaign encouraging people to “Be a Lifesaver” and call for help when they see an animal in need. 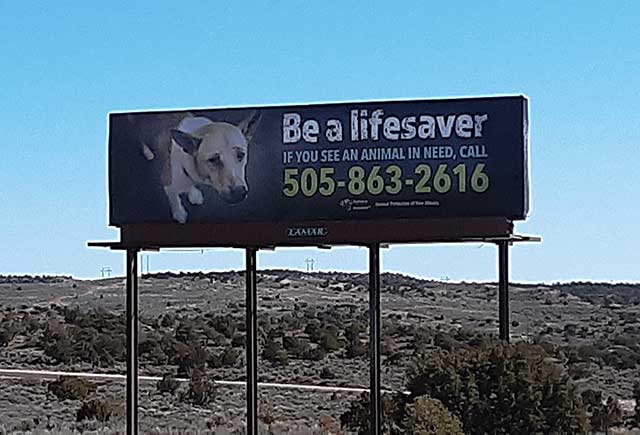