You are here: Home / What We Do / Building Foundations to Keep Animals Safe / Train. Don’t Chain.® / What’s Wrong with Chaining a Dog? 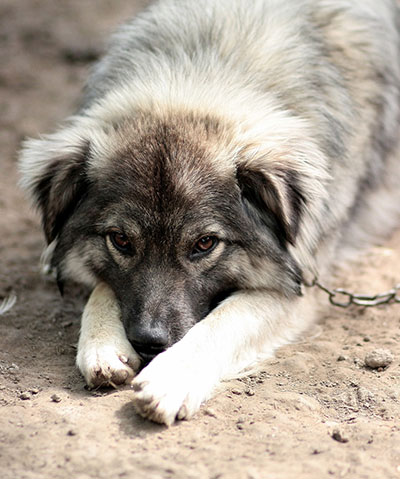 It is safe to say most people have seen a dog on a chain or a dog tied to a tree or a dog house. They may have looked the other way. Or, they may have said to themselves, “There ought to be a law”.

Let’s take a closer look at the reality of chaining a dog. Chaining, or tethering, as it is often referred to in studies, is the practice of chaining, tying, or fastening a dog to a ground stake or a stationary object such as a tree, fence, car, or dog house.

Tethering has long been a common practice of many dog owners throughout New Mexico and elsewhere, but in recent years it has come increasingly under question by communities, animal advocates, and public agencies. Risks to public safety and the inhumane treatment of dogs are widely viewed as its two primary problems.

Attacks on people by tethered dogs have been documented and studied in many disciplines. One conclusion is that dogs tethered for long periods of time can become highly aggressive. When confronted with a perceived threat, a tethered dog, unable to flee, often feels forced to fight and attacks any unfamiliar animal or person who wanders into his or her territory.

Children are the most common victims of dog attacks. According to dog bite statistics published in the Journal of the American Veterinary Medical Association, 70% of reported fatal dog attacks and more than half of bite wounds requiring medical attention involve children. Frequently, such attacks occur when a chained dog lashes out, either in aggression or aggressive play, and injures a child who has approached him. In the period from October 2003 – September 2007, at least 175 children across the country were either killed or seriously injured by chained dogs.

On a tether constantly, a dog is deprived of social contact with other dogs and humans. Sensory deprivation becomes the norm, and boredom, frustration, anxiety, agitation, and aggression follow in rapid succession. On the other hand, dogs who are adequately socialized with humans and other animals – and who are also properly restrained by the use of fences and runs while they are outdoors – are less of a threat to family members, passersby, law enforcement officers, public utility inspectors, repair persons, postal delivery persons, and other visitors.

Without exception, people and organizations widely regarded as experts on the humane treatment of animals and animal behavior agree that a solitary life on the end of a chain is a cruel sentence for dogs. Through domestication, dogs have been bred to form strong attachments to their humans. They thrive on interaction with their families, adding to their frustration on the end of a chain.

Persistently chained dogs also lack proper exercise. They are frequently denied access to basic shelter, shade, food, and/or water. They are left vulnerable to attacks by other animals, people, and vermin. Finally, they are forced to eat, sleep, urinate, and defecate in the same limited space.

A dog’s tether can easily become entangled on a stationary object, leading to injury or death. New Mexico animal control and other law enforcement agencies have many photographs of dogs who have hung themselves by jumping over a tree, fence, dog house, car, or other nearby object. In addition, agencies commonly see evidence of cruel treatment and neglect such as collars, chains, or cables embedded in dogs’ necks. Often these injuries are so serious that the dogs must be humanely euthanized. Tethered dogs are also prime targets for thieves who sell stolen dogs to research facilities and organized dog-fighting operations.

To learn more about helping chained dogs, click here to download a free copy of “The Public Safety and Humane Implications of Persistently Tethering Domestic Dogs,” a 2008 report produced by the New Mexico Department of Public Safety in collaboration with APNM. Please report animal cruelty to your local animal control office or call APNM’s statewide animal cruelty hotline at 1-877-5-HUMANE (1-877-548-6263).